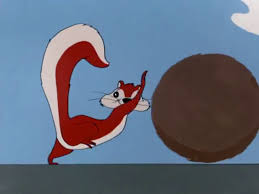 A brilliant little silent short from a brilliant man who knew exactly how to tell such stories. Not only considered one of the greatest, but the picture’s star would go on to at least have a cameo in “Back in Action.”

On a lovely warm summer day, a little squirrel crosses the street and heads towards a nut store. Unlike how it usually is in these cartoons, this squirrel doesn’t speak. In fact, he acts quite a bit like a real life squirrel. For the most part. For example, I don’t think he read the sign saying “Nuts” judging by how his nose twitches, he acted like most squirrels do and simply smelled the food. Luckily for him, (I’m just assuming the squirrel is a male. Everything I’ve read about this short says so.) all humans have mysteriously vanished from the picture, so there is no one to stop him from heading straight to the peanuts. (Which aren’t really nuts. I claim false advertising)

It’s not long before he spies the walnuts for sale. (An actual nut this time. Good for them.) Since they are bigger, he doesn’t hesitate to ditch the peanuts for a more abundant food source. But there’s always a bigger fish and he ultimately lays eyes on the coconuts. (Which really aren’t nuts, but nobody cares at this point.) They’re big enough for the squirrel to just need one, so he heads back across the street to enjoy some lunch.

But here’s where the conflict really begins. Despite being a rodent, his teeth don’t make so much as a crack in the fruit’s shell. He decides to act smarter than the average squirrel, (which to be fair, is still rather smart.) and uses some tools. Seeing as he is an animal, he starts with one of the tools chimps swear by: a rock. Upon slamming it onto the fruit, the rock snaps in two. And dropping it from a tree just embeds it in the ground. Time for the human tools. (There are too many obvious jokes for me to use here, so just use your favorite one.)

First up: a saw that loses its teeth. Then a jackhammer that is weathered away by the coconut. Eventually,  the squirrel is forced to take drastic measures. It’s time to drop the thing from the highest building he can. We get some great shots here. Several fade-ins to show the squirrels progress as he slowly, but surely hoists the heavy load up the countless stairs. The poor thing! I would gladly carry them to the top. But the squirrel is determined, and does ultimately make it. And he drops his meal. Wouldn’t it be great if this worked? Instead, the fruit just makes a chunk of the street lower than the rest.

That’s it. The squirrel gives up. And he is thoughtful enough to return the thing to where he found it. (Besides, there are many more things to choose from. Those walnuts looked pretty tasty.) But just as he puts it back in place, it slips and lands back on the ground. And it finally is cracked! The squirrel hurries over and pries open his prize. Alas, this appears to be a rare subspecies of matryoshka coconut, as there was another one inside it. Adding disbelief upon stress, the squirrel passes out.