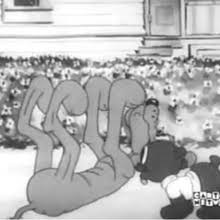 This short is very important to the history of Warner Bros, and yet, unless you’re a full fledged “Looney-tic” (like me.) you wouldn’t know that. I’ll get to why, but the summary comes first.

Porky is excited over his latest read. A book full of great tricks one can teach to their dog. Not only are they sure to build some great social bonding exercises with your hound of choice, but it surely is fun. Porky rushes to share some great times with his dog, Rover. Unfortunately, Rover is quite old and shaky. He’s at that age where one should really just let him sleep all day, or put him down. Still, Rover is as loyal as you’d expect a dog to be, and despite his lack of hearing, bad back, and possible rheumatism, he does his best to share in Porky’s joy.

Enter our titular rival. He’s chubby, he’s a puppy, his catchphrase is “Yeah, man!” so we’ll call him “Chuppy.” He’s also quite the prick. Witness event A, where Rover tries his darnedest to roll over, but Chuppy blows him back once he’s halfway. He’s also here to steal any glory he can, as he jumps through the hoop Porky is holding. He pulls it away before Rover can attempt the jump, and the old dog leaps into a washtub. (Tragic AND hilarious.)

Chuppy flat out tells Rover that he’s finished. He’s through. (Yes, both dogs can talk.) Mel even shows off his vocal prowess again, by having the little stinker imitate Rover and Porky. Porky still loves his dog, and wants to prove to everyone that he’s no has been. Why, surely he can fetch a stick. A classic! So sure of him self, Chuppy gives the old dog quite the head start before he runs off to get it himself. (Maybe he’s such a douche because his stub-tail keeps disappearing?) Porky tells the young dog to let Rover give it a try, and he half succeeds. His dentures get left behind with the stick. Chuppy retrieves both.

Porky throws again, and this time restrains the pup from stealing Rover’s thunder. Seems he threw the wrong way, as it lands next to a box of dynamite. Rover still brings it back, and Porky panics. He throws it away, and Chuppy runs after it. Rover, however, rushes to a dictionary to see what exactly this “dynamite” is. (He may be old, but the brains are there.) Chuppy, meanwhile, found the rest of the explosive stockade and brings it all back to Porky. Poor guy tries to throw it away, but the dog sends it right back. And I can’t say he just doesn’t know any better, because the little b*stard lights it all. (He’s a literal, figurative S.O.B.)

Rover finally learns the meaning of the word, and rushes to save the day. (Meanwhile, the little dog is actually laughing as Porky says his prayers. So unfair! Why’s he gotta be so adorable! Keeps me from kicking him.) Rover to the rescue! He gets the dynamite, says a silent farewell to his best friend, and gets it away from the two. Porky and Chuppy rush to his side, but it looks like they are too late. Chuppy sobs and admits that this is all his fault, and that not only CAN you teach old dogs new tricks, but he concedes that Rover is the best stick retriever there is. That’s all Rover wanted to hear, and he reveals that he’s fine. Maybe they can all be a family now.

Oh, and as for that important tidbit? This is the first time Porky did his take on “That’s all folks!” Cementing his place in Pop culture for all eternity. *salutes*

Favorite part: There was plenty of great Clampett action and comedy here, but my favorite part was when it looks like Rover died. They drew him to look like he’s been torn into pieces! There’s no blood, but it looks like there should be! Clearly neither dog has been fixed, because this picture has BALLS!