“Why that little monster of yorn, makes Dennis the Menace look like an angel!” 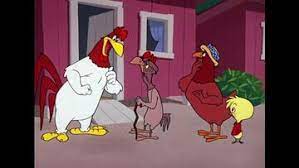 A hen is looking for somebody to babysit her son while she goes to a hen party. (Her words.) Her name is probably Widowhen, seeing as how the two guys who address her, refer to her as “Widahen” and “Widerhen.” I’ve at least narrowed it down to those three. But Mr. Cackle, the elderly rooster on the farm, refuses to take part in babysitting. Junior there, gives chickens a bad name. (Worse than McNuggets?)

Having heard those remarks, Foghorn steps in to defend the kid. (I’m pretty sure Mel is just using his Tweety voice for this character, they just didn’t speed it up.) In Foggy’s words, there is no such thing as a “bad boy.” To prove it, HE will take over the sitting while W-hen is gone. Barely out of sight, and Junior pokes his sitter with a pin. Foghorn is ready to strangle, but he can’t let the cackling Cackle have the last cackle. Chalking it up to simple boyhood pranks, Foghorn takes his charge to find him some fun.

Good thing Foghorn has a box of toys for the little scamp. He can play, and Foghorn can nap. (The best way to babysit. Only neglectful types talk on the phone while they’re in charge.)

Junior is upset to find this box intended to entertain little children only contains things to entertain little children. He decides to take a peek in the barn because “There’s always something exciting in a barn.” (Man, if I had couple hundred dollars for every time I saw that on a T-shirt.) To his delight, he finds a cement mixer and uses it to rig up a little trap. Then, playing phony phireman, he wakes Foghorn up with a phake emergency that sends him running right into the mix.

Once free of the concrete prison, Foggy threatens to tell the kid’s mother. Junior has blackmail of his own though, and he threatens to tell his mom about Foghorn’s crippling horse race addiction. Foghorn denies such things, but he can’t resist once the kid starts imitating one. The rooster angrily tells the kid to go play in the freeway. Which I only bring up so I had an excuse to make this: 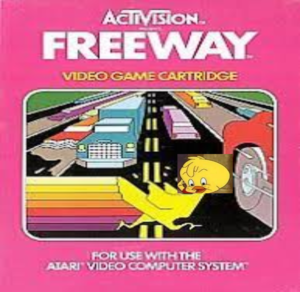 Junior finds a balloon to play with. It’s the weather variety, so he attaches it to Foghorn’s hammock and cuts it loose, lifting the big bird into the stratosphere. Naturally, Foggy wants down. The boy shoots him down, and provides him with a landing pad as well. It’s the land mine variety, so Foghorn blows up. And yet, he still claims there is no such thing as a “bad boy.” Mostly because this boy is the “worst.”

Favorite Part: The fact that Junior was upset with the toy selection, when one of said toys was a gun. I don’t care if it was still a toy, he could have modified it!