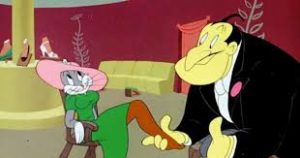 At a department store, there’s a store that is having a sale on sporting goods. As a nice touch, they also have a rabbit hopping around. The bad news is, that the sale is over and Bugs is going to be…stuffed! The manager (a caricature of an old radio person) is yellow and has an annoying laugh. When Bugs realizes whats to become of him, a chase starts.

Bugs dresses in drag and yellow guy becomes a pervert. Soon after he learns it’s a ruse, and they begin the chase again. Each time they run into a clothing section, they come out wearing the wares. Soon, Bugs has been cornered on the roof of the building (this reveals Bugs’ eye color to be blue) and running out of tricks, tells about a story he was reading.

There was a situation like this, but behind the big character was a “frankinsense” monster. Bugs leaps behind him and makes a face. This scares the manager, and he leaps off the building. Bugs makes the face to himself and is so scared he jumps too.

Finally: I wonder why Porky does the ending. I think that’s the only time he did that for a Bugs Bunny cartoon.