“Lets agree not to cheat.” 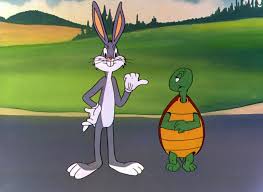 (Note: Every time Cecil was used, he was with a different director. I don’t know. I think it’s fascinating.)

At an animal sauna (geysers) Bugs is reading the classic fable, “The tortoise and the hare.” He finds it ridiculous that a hare got bested by a tortoise. Yeah, Cecil is there too. He says he can beat him. (This short forgets about the past two races. Shame. I was liking the continuity.) So a race is held.

Cecil is planning to cheat, but Bugs gets rid of almost all of his tricks. He did not however get rid of his rocket powered shell. Easily outrunning Bugs, he has time to send him a postcard. Feeling guilty Bugs sends a gift back. When Cecil gets it, Bugs jumps out and is in the lead again.

Cecil charges, but Bugs takes the shell for himself. It breaks down, and Cecil fixes and takes it back again. Bugs, however, puts water in it. Soon they are near the finish line and Cecil lets Bugs win. Bugs boasts about how fast he was going. Cut to the cops standing near a 30mph sign. Bugs swears revenge at the toitle. Iris out.