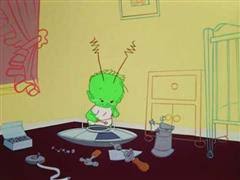 Back in the year of 1954, the planets of Earth and Mars got a little too close to each other. Because of this, two babies, both of whom were heading towards the planets got intercepted and each ended up heading to the other one. (That’s right! Babies come from space. You didn’t really think a stork delivered them, did you?)

Enter Joseph Wilbur. He’s about to become a father. While nervous, he is also quite happy. So when he is called to see his new child, he is quite excited. His kid is really cute. (When Jones draws something that is supposed to be cute, it is DANG cute.) Chubby body, little eyelashes, big smile. Oh yes, and green skin and antennae. (Perfectly normal for that age. I’m sure it will clear up by his teens.)

Father is a little bit ashamed to of his offspring. But Martha, the wife, won’t have any excuses and sends the two off for a afternoon stroll. Those antennae are marvelous things! They allow the infant to communicate with insects and act as an extra pair of limbs. Perfect for taking an old ladies glasses off, and giving them a try. For some reason, the broad goes into hysterics. Maybe Dad had a reason to be so wary?

Martha also soon sees that the kid is much more different than your usual baby. He does income tax, builds molecule models, and predicts the possibilities of hurricanes thirty years into the future. You’d think most parents would be over the moon to find their kid gifted with such intelligence, but they are more in the “worried” camp. Considering we humans don’t especially like strange things that can’t be explained, it’s probably for the best that they try to make him take up more age appropriate activities: like TV watching. Seeing “Captain Shmideo” holding up a toy spaceship inspires the lad to make his own. (I’d think that the parents would freak out again, but this time they are more impressed than anything. Hypocrites.)

Later, they get a message. From Mars of all places! Turns out, they have the wrong baby. The Martians would like to exchange the two. (Given how self-sufficient the Mars variety is, they are probably going insane with all care they have to supply the Earthling with. On another note, at least the Martians bothered to give both babies names. Joseph and Martha couldn’t even be bothered to do that. So from now on, our green baby is Mot and the one we never see is Yob)

Wouldn’t it be interesting if it turned out that the Wilbur’s actually decided they loved the kid they were given? Well, that’s not happening. It’s the 1950s! What makes you think a white suburban couple would want to look after a child who dared to be part of a different race? Sign them up for the exchange! Only one problem: Mot’s ship he was building actually works, and Joseph has to chase after him. The Martians aren’t going to give him squat if he doesn’t hold up his end of the bargain. Despite Jo’s efforts, the chase ends with him missing his chance to grab the baby and falling out of a open window several stories up. Mot meanwhile, makes his way aboard the (in this case probably literal) mother ship. They got what they came for, they leave. (They’re probably just going to eat Yob)

But Joseph doesn’t die, because it was all a dream. He is back at the hospital and goes to look at his normal human baby. But before you get upset for the use of the most cliched of twist endings, do note the band on the babies wrist. It must be in some kind of foreign language. I mean, what on Earth does “Yob” mean?