Attention everyone! Opossums are NOT possums. They live on entirely different continents! Apart from both being marsupials, they are only distantly related! Look… 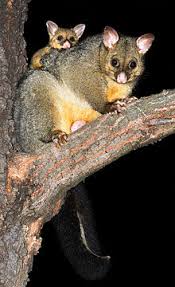 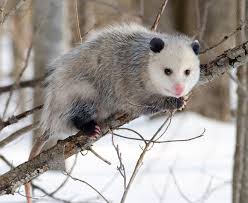 Now, why do I bother so much? Because as the Lorax speaks for the trees, I speak for the animals. Since they can not tell when someone is using the wrong name, (that ironically, humans gave them) I will have to do so. And today’s picture is full of this kind of mistake.

The mailbox at the beginning is the only time the creatures are given the correct name. Seeing as how they all have American accents, they are clearly opossums. Though, honestly, you can’t really tell. The two parents look like some subspecies of kinkajou and their son looks like Hippety Hopper. (  At least he’s another marsupial)

Speaking of the son, his mother is upset to find him sleeping. (I am also upset. Opossums DON’T sleep upside down! They don’t even hang that way! They’re too heavy to do so!) Her reason is a lot more poignant. He’s got chores to do! But the kid is so lazy, that as soon as he hangs down, he sleeps again. (I understand his motives at least. The best part of life is being unconscious.) Ma threatens to sic his father on him, but Junior doesn’t care and sleeps once more.

Ma makes good of her word and tells Pa. He agrees that their son needs some discipline, but reasons that talking will net no results. Good thing he has a hunting dog costume on standby. (Don’t we all? I can’t count all the times I’ve needed to dress up as a dog.) One session of son scaring will keep the kid awake for days! Seems to work too, as one look sends Ma into hysterics and has Junior running for his life. Still, lazy as he is, he doesn’t go far before he stops to sleep once more.  Run and sleep, run and sleep. It goes on like that for awhile before Pa gets his son cornered.

Junior decides to try something opossums actually do, and plays dead. Seeing as how he is one himself, Pa doesn’t fall for it and instead ties his offspring to a firecracker. (Wait, what is the point of this? I though you were trying to stop his nap habits, not KILL him.) Either way, Junior ties the rope around his dad’s ankles when he’s not looking and escapes again.

Finding him at the top of another tree, Pa ties another one down with a rock so he can use it as a bridge to get to his sleeping son. Of course, said son cuts the rope just when his dad is crossing and flings him miles away. Pa proves his Olympic training was worth the effort, and he runs back immediately to catch his kid.

Back home, Pa tells his wife that Junior is finally doing the potato peeling he was supposed to be doing this whole time. The scare tactic didn’t work, so Pa just tied a balloon around his son. Now, forced to be upright, Junior can’t fall asleep anymore.