“One of those little, tough guys, eh?” 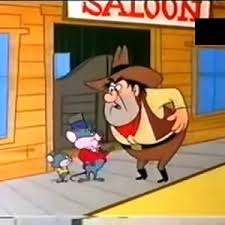 Directed by Bob McKimson; Story by Cal Howard; Animation by Ted Bonnicksen, LaVerne Harding, Jim Davis, Ed Solomon, and Norm McCabe; Layouts by Bob Givens and Jaime Diaz; Backgrounds by Bob Abrams; Film Editor: Hal Geer; Voice Characterization by Larry Storch; Musical Direction by William Lava. A Looney Tune released on March 29, 1969. (Also sports a unique version of “The Merry-Go-Round Broke Down” that was not used in any other shorts)

As one does when they are of the magic arts, (and are willing to let the muggles view it) Merlin is off to perform. His destination is Oshkosh, but you wouldn’t know it if he didn’t say if the surrounding desert is any indication of where he is heading. After he and his sidekick, Second Banana, lose their handcart, (and Merlin is run over by a train) they see a sign advertising the town of Rattlesnake Gulch. Seems like as good a place to take a breather as any.

As is typical of these kind of towns in these kind of pictures, there is a thug at the saloon looking for any excuse to start a fight. Merlin just being polite counts, and the brute dares him to take a punch. (The poor guy has no name in this picture, but I swear I read once that he goes by Tuff. So Tuff it shall be. Isn’t that a shame?) Second Banana takes that opportunity, and then goes on to build Merlin up as some sort of mighty mouse.

To prove it, S.B. puts a board on Merlin’s shoulder, and tells Tuff to knock it off. Hitting one end, causes the other to rise up and knock the galoot out. When he comes to, Merlin is more than willing to pass the blame onto his sidekick. Tuff can’t believe he could have been knocked out by the little fella, and Merlin decides to set up a boxing match. $100.00 to the winner. Tuff agrees. After all, beating up a mouse proves you have nothing to lose and everything to gain. (It also gets you banned from Disneyland)

That night, Merlin reveals the secret to ensure his little buddy’s success. He will be wearing some enchanted boxing gloves that will do all the hitting for him. Hopefully they hit fast enough, so S.B. doesn’t have to worry about dodging or anything, but they look like they’re up to the task. Next day, and everyone is ready to get this fight underway. In one corner, a chubby, nipple-less man without a real name. In the other, a mouse with no pants who everyone wants to see win. (It’s an interesting fight)

Those gloves are a marvel! Second Banana wails away, and Tuff doesn’t land a single punch. In fact, they might be a little too good, as Merlin can’t get them to stop once they get started. Leaving S.B.’s body behind, the gloves chase the Tuff guy out of town. I suppose that makes the mouse our champion? I mean, the fight IS still going on.

Favorite Part: When Merlin makes the wager, he asks for the ruffian to put his hundred bucks in the hat. When asked where HIS contribution is, Merlin pulls the same money out. (I saw this joke coming, but it still got a chuckle out of me)