“He’s not long for this world.”

What a great start to this cartoon! A man escapes from a ship known as the “Sad Sack” 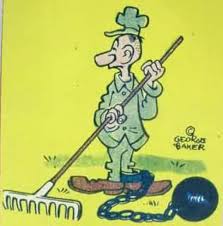 It’s his line that lets you know you’re in for a good time. “I was a human being once.” One of the best things said by man or toon on screen. (I’ve used it before. Sadly, instead of laughing, people ask what I mean. I hope whoever lives on my home planet rescues me someday.) Said man was the prisoner of Shanghai (Yosemite) Sam. A man who likes to have a one-person crew to do everything on the ship that he feels is beneath him. With the guy gone, looks like Sam will need a new one.

What luck! Bugs Bunny is hanging around this place. (I’m calling it the “Whaztup Dock” Applaud now.) Sam, acting like a barker, offers a free cruise around the world. Seems legit. Bugs accepts and happily boards the ship. As he waves farewell to the crowds. (Read: one mouse) Sam strikes, and a dazed Bugs ends up rowing the ship (the sails are just for show) with a ball and chain on his leg.

He complains. The best joke in the picture happens right afterwards. Words do it no justice, so I’ll let you watch for yourself.

You seen it? It was a gut-buster, right?

As the crew, Bugs is ordered to swab the deck. He does the classic “Oh no I’m not” bit, and, surprisingly, loses. (It always helps to shake up the formula a bit. Well done, everyone!) He gets his revenge by writing unflattering comments about his captain on the deck. Angered, Sam takes the mop himself to remove the graffiti. Bugs enjoys his short break before Sam wises up and points a gun in his face.

Bugs claims the ship is sinking, and since Sam is the captain, he has to go down with the ship. As captain, Sam makes Bugs captain. Under the new command, Bugs still refuses to let Sam escape. Women and children first, you know. (Why is that the rule? Is it just common courtesy? Or are men not worth saving? *thinks about the various guys I’ve met in life* Yeah, it’s a good rule.) Sam has to sacrifice his dignity, and dress in a wig to get out alive. Bugs also insists he take a baby along with him. (It’s an anchor, but Sam doesn’t realize that until he is in the water.)

Once back on board, he steals what Bugs claims is a treasure map. Sam follows the clues to the promised riches. (Keep your eyes open and you might see one of Sam’s disappear for a millisecond. I love these tiny errors.) He finds the spot and digs. On a wooden ship. In the middle of the ocean. Which is going to cause it to sink. Which it d-

He fixes the hole, and shoves off once more. Bugs is clearly not worth the trouble, so Sam is going to cannon him to death. He takes aim, but Bugs moves. The ship gets another hole that Sam has to fix. So the solution is simple: aim UP this time. It works in theory, but gravity ruins things and the ship goes down for the third time. Sam fixes it again, but Bugs attaches a rope to the vessel. This strips most of the wood, and it sinks again. Sam calls it quits. In turn, Bugs gets the cruise he wanted via a rowboat. Sam is the one doing the rowing this time. I bet they’ll end up great pals.

Favorite part: The joke I wouldn’t spoil is tempting, but I think I love that one fellow’s quote much more. It could be used in several literary classics.