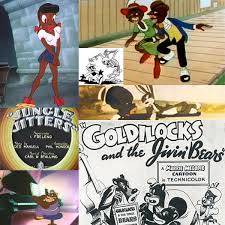 When you watch as many old cartoons as I do, you notice that like many things, they are a product of their times. From referencing the biggest stars of the silver screen at the time, to making mention of a war that has been over for nearly 75 years as I type this. However, the biggest change (at least to me) is how the cartoons represented African-Americans.

Remember, at this time in history, many people of different races were still seen as different. Were they people now and not slaves? Sure, but they still looked different to white folk, and you know how society treats what is different. Either with fear, or mockery. In this case, mockery was what was considered the appropriate response.

Is this appropriate today? F*ck no! Get away from me if you think that! Was it appropriate then? No, not really. So why was it so commonplace in American culture? Simple, it was just how the world worked. Were black people offended? No doubt the majority of them were, but what were they to do about it? Society said it was okay, and that was enough fort the whites. I’m sure many of them weren’t entirely comfortable with these things, but if everyone is doing it, surely it must be fine. (And again, it isn’t.)

So that is why many of these older cartoons can seem a tad racially insensitive at times. Because they are. Now, what if society’s opinion on these “harmless” drawings were to change over time? No worry, we have editing for that. Just snip out that little bit of offense and none will be the wiser. Everyone can laugh at the slapstick and puns, and nobody need be upset. Unless of course, the cartoons in question were built upon this form of “comedy”…

Thus, we have what is known as “The Censored Eleven.” These cartoons have so much racist stereotypes in them, that you couldn’t edit them and still have any cartoon left. What’s the solution here? Well, I suppose you could put one of those “viewer discretion is advised” signs and- NAH! There’s only one thing to do to protect the easily molded human mind. Just flat out pretend that they never existed! Never let them grace the television screen again, or for that matter, any licensed home media. Do this and all will be right in the world. What a good idea!

Except… no. That’s a terrible idea. Okay, these probably aren’t the best things to allow children to view, but flat out refusing to acknowledge they exist? So, what are we supposed to take from this? That there was never animosity towards different races and we got along great after slavery was abolished? That the white man saw the black man as his equal and treated him as such? That’s insulting to history! Why can’t we take responsibility for our actions? We can’t look at these and say: “Wow. That wasn’t funny. Good thing we don’t do this kind of crap anymore. Interesting what jack@$$es we used to be, huh?”

Keeping these off of networks that children may watch, and DVDs that they might want to view? Again, probably for the best. Children are impressionable and it is possible they might think these things are still socially acceptable. (Though, I would like to point out that I saw a few of these cartoons as a kid, and I never thought they were accurate. In fact, I asked the adults in my life why the black people were talking and acting in such a way. Was it supposed to be funny because that’s not how anyone acts?)

However, banning these cartoons outright from adults? I think that’s a little extreme. Why not just add one of those disclaimers that preface other DVDs that portray earlier time periods. Give the whole “It’s wrong and always has been, but many people didn’t intend to offend as the world was messed up, and ignoring it is worse, so we are flat out showing it. Be an adult and learn from this.” spiel.

Honestly, is it so wrong to view these? What about “South Park?” A show that at least offends one type of people with every episode. It’s lauded as one of the greatest animated series to ever be created. (I myself, have watched very little of it, as it offends me.) However, that doesn’t mean I actively try and get it removed from the world. I don’t like, I don’t view. Simple. Besides, doesn’t all humor have to offend at least a little? Slapstick humor derives from anothers physical pain, puns tend to be funny when they are used to annoy someone else, and these cartoons… honestly, really DO go a little far. But they still are animated wonderfully, have some voice talent that is still really quality stuff, and still can have a joke or two that can be funny. Heck, two of these cartoons are considered to be part of the eclectic “100 greatest” and one of those two even managed to earn a spot on “the 50 greatest cartoons of all time.” (And it wasn’t near the bottom of the list either. It was in the top half, thank you very much. At number 21)

All in all, I’ll say it again: These were wrong, and they probably should never have been made. Still, what’s done is done and we should stop pretending we have nothing to be ashamed about. Making mistakes helps us grow as people, and sets examples for us to learn from. (And boy, are these some big mistakes.) As long as you are an adult, (or if you are underage, if your parent thinks you can view these) then I don’t see why we can’t re-release these on DVD. It probably won’t ever happen, so it’s a good thing you can view these online. (Crappy quality, but that’s fitting for the crappy stereotyping)