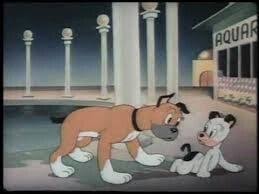 Talk about obscure! (That, I intend to do.)

Only the most diehard Looney-tic’s will even be aware of the existence of these two. On your left, a boxer. On the right, some type mixed breed, I think. (Surely you don’t expect me to know everything. I believe it’s at least part beagle.) As the title suggests, these two are curious. Curiously peeking into all manner of places like homes where they don’t belong.

At least, that was the shtick in their first two cartoons. Upon appearance three, they became more akin to adversaries, with the big one trying to keep the smaller one out of an amusement park. Later shorts would have the two both trying to keep a bone all to themselves, but constantly losing hold of it.

They don’t have names. (They don’t even talk) They need names. Names that shall be hereafter be canon. I think I’ll call the bigger one: Charles. Now, you may think this is rather uninspired and weak, but actually, I’m naming the fellow after my dead Grandfather whose name was Charles and-yes, I’m naming him after his director. For no other reason then because I want to name the other one, Joe. (Now I’m being clever.)

These two aren’t all that funny, but they are amusing and cute. (Like dogs are.) Plus, they were paired with Proto-Bugs once, so they at least have some sort of legacy. They get my vote for most obscure characters that meet my five appearance rule. Ah, well. At least they had more of a film career than I did. (Hey, one commercial was all I needed to feel special.)