You ever hear of “Ripley’s Believe it or not”? It’s a bit obscure. Newspaper comics, books, museums, and more: all to inform you of things you might just claim as false. I mean, a little boy named Chalres Schulz getting a drawing published? Preposterous. I’m sure he never went anywhere, did anything, knew anyone.

So yeah, obscure it may be, it was still worth a parody in a Warner Bros. picture. Brought to us by the master of gags: Tex Avery. Imagination is limitless, so we’re guaranteed a good time! Egghead is also here, but he’s going to play the role of doubting thomas. (Which isn’t fun to be. Be warned, children.)

What sort of oddities, strangeities, and weirdities could we possibly be shown? Example: a man has been drinking fifty quarts of milk a day for two years. Would you believe that all those calories didn’t kill him? It just makes him unleash a good lowing. (Which is odd. Cows give milk, they don’t drink it. Would eating enough apples make you act like a tree?) There’s a snake charmer, (Whose hood looks more like a shell than anything. Cute gag though.) and a man who builds ships in bottles. (You might not be impressed, but I am. I couldn’t even fit my head in one.)

A man calls pigs from several states away, (you don’t believe that most of our states are just misshapen blobs? We said “Believe or else!”) another hasn’t left his room in years. (Jails frown on that, you know.) There’s even a human basketball! (I’m not jealous. You’re jealous.) Keeping in “Ripley’s” style, there’s even some demonstrations on brain tricks you can play with your friends. (If I had friends, you know I’d give it a try.)

Take a look through the telescope. There’s life on Mars you know. (Warner cartoons with martians? No!) Well, it’s really just “Buck Dodgers.” (What a bad pun. Why isn’t he named “Duck?”) And he’s an over the top gay stereotype. The third I’ve seen this year. Okay, there’s life on Mars. Is there any on the Moon? Nope, and we’ll check to prove it- Hey! There’s men on the moon! Men who sing! I wouldn’t have thought that possible, what with the lack of an atmosphere and all, but I guess I’m just wrong about everything.

With what we’ve seen, is there any reason to return to Earth and see what wonders are still there? I’d say so. There’s a wishing well that responds to the wishes made. It doesn’t grant them. Technology isn’t there yet. There’s even a device that allows us to hear the ants talk. (Must be a newly discovered species, as our narrator identifies it as a male, but I see no wings.) Last up, we’re going to see the classic trick: sawing a person in half. Egghead still doubts, despite all he’s experienced, and offers himself as a test subject.

Believe it or Not! (By Dr. Foolio)

Today, a one Egghead Penner found out that the human body can survive in two halves! His head and torso stayed in one location, but his waist and legs walked off by themselves! 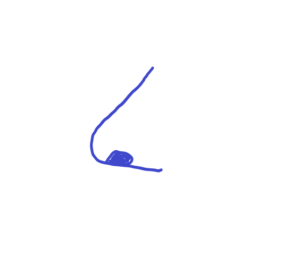 This drawing of a nose was submitted by Bradley Daniels, of Annapolis, Maryland.

Draw a square. Cut the square in half. Magically, you now have two rectangles! Amaze your friends!

Favorite Part: Seeing the berth of a baby, for the first time on screen. (It’s much more funny when you hear it spoken, as opposed to reading it.)