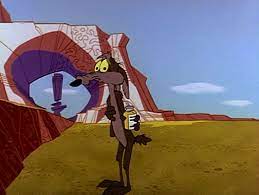 The Roadrunner is so fast, that it only makes sense that his credits would be fast too. They appear before the title even! And how is Wile E.’s never ending chase going today? Actually, I’d say better than ever, seeing as how he manages to actually wrap his paws around the bird’s neck. A tussle ensues, and when the roadrunner shaped dust clears, the coyote finds nothing is left. His prey beeps behind him, and sends him flying up the nearby telephone pole.

Luckily for the coyote, he didn’t receive an electrical shock, so he begins climbing back down. The Roadrunner comes back to beep him again, and both predator and the pole get spooked enough to jump into the air. Sure, they both come back down, but the pole lodges Wile E. underneath the ground. A bunch of gags follow that don’t merit description. I mean, I swear you’ve seen them all before. The truck mistaken for a roadrunner, pulling a rock on himself, a detonator going off too soon. I mean why waste my time- d*mn it.

The other gags are as follows: trying to get the bird to use a detour that leads into a gift wrapping machine. Another beep gets Wile E. inside it himself. (Wraps him up with a cute little bow, too) Then, a fishing pole with dynamite at the end. When he casts, he gets his… well, I guess I could call it bait (it’s certainly not a lure) stuck in a cactus. He pulls hard, the plant pulls harder, and he is reeled in himself. Now tangled in the line, he can only fruitlessly attempt to blow out the fuse. (Doesn’t work)

Earthquake pills! A pill that causes the body to experience the same sensations one would feel during an earthquake! (You’d be surprised at how much of  a market there is for those.) Wile E. labels a pile as some of that unbelievably tasty free birdseed and waits. The Roadrunner gulps the pile down and heads off. Hey. That wasn’t supposed to happen. Have they expired? Wile E. is a canine of science, and tests that theory by ingesting a pill himself.

No reaction. Well, maybe one pill is just too small a dose? He downs the bottle. No reaction. Guess they were duds. But wait! There’s a bit more writing on the bottle! Seems the pills aren’t effective on roadrunners. Then… that must mean… they work like any ordinary pill and take a bit of time to kick in. Oh boy. These things work like a charm after all! Wile E. shakes, rattles, and bounces across the desert landscape, destroying many natural constructions that took rain and wind millions of years to make.

Miraculously, he makes it out of the pill’s cycle with nary a scratch on him. So relieved is he, that he doesn’t notice his trip had him ending up at the top of the cliff. Since he doesn’t notice that, he walks off said cliff. Can’t win them all.

Favorite Part: His reaction when he catches sight of the bottle’s fine print. He notices it the moment it leaves his grasp, and dives to catch it. What a performance! Haven’t we all been in a similar predicament? So relatable.