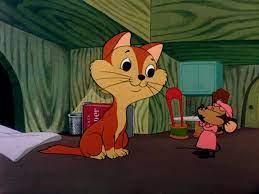 As a man drives his car, he throws out something in a sack. Judging by the sounds coming from within, I’d wager that it’s a kitten. And it’s a wonder that it survives to the bottom of the hill, as it looks like that trip hurts. The small creature comes to a halt at the home of two mice, Clyde and Matilda. Matilda is instantly smitten. A child is something she’s always wanted. So what if he’s on the big side? Just more of him to love, right?

Clyde isn’t taken right away. As he points out, this baby is a cat. One of him and his wife’s natural predators. In other words, the kitten is absolutely, positively, not going to be their child. Which is story-talk for “the very next scene contradicts that statement.” Looks like the kitten is a member of the family after all. But he can only stay so long before contrasting diets make things difficult. The kitten just doesn’t like cheese.

Matilda concedes that her husband is right. (Something most husbands can only dream about.) Junior would be better off being raised by humans. I mean, he’s well past weaned. Clyde takes him to be left on a different doorstop, telling him about how much better his life is going to be. None of that “We never really loved you.” B.S. Quite the contrary, as it seems Clyde has grown to love the kid, and tearfully bids him farewell. Since they didn’t leave Junior at MY house, the kitten is subsequently adopted by the lady therein. (So what if his nose disappears for a second.)

A year goes by. The mice are still alive, and figure that the day the kid is left on your doorstop is as good as any other day to call their birthday. Time for visit. Junior has grown up by this point. And it looks like he’s matured into quite the mouser, as when Julie (the name I’ve decided to give his owner) catches sight of the rodents, he jumps right into action. He grabs the mice, gives them a good sniff… and instantly recognizes them as his parents. It’s really a sweet scene. (Yes, I’m being sincere.)

Julie isn’t happy to find the cat not evicting them. And oddly enough, once Junior puts them in his mouth, she tells him to take them outside. (Your pet too good to eat mice? Or is there a strict “No blood on the linoleum” rule in effect?) Matilda figures that with the reception they’ve gotten from 50% of the household, it’s best that they leave already. Junior won’t hear of it. And I like that. One shouldn’t have to be ashamed of their folks. (Although, I think the other way around is totally fair.)

He invites the two to partake in some snacks. He grabs the most exotic cheeses from the fridge, when Julie catches him in the act. Birthday or not, she’s not going to allow him to touch the food she buys. Clyde is not one to be deterred. He wants that cheese. (I like this guy.) He uses a jug of cider as a boost, but accidentally falls inside it. It’s the hard stuff, and Clyde is thoroughly plastered.

Junior now has to keep his dad safe from the various dangers of the house. (Namely Julie.) The more his mistress catches him messing with various things, the more cross she gets. Culminating with her deciding to kick him out should he bother her one more time. Lucky thing, Clyde’s back to normal by now, and the two decide it’s time for them to go. Junior still feels no ill will towards them, and earnestly hopes for them to visit again.

Back at their place, Matilda is overjoyed to find another kit has been abandoned at their door. (That sounded a lot more sweet in my head.) But it’s not a feline this time. It’s a skunk. Interesting that NOW is when Clyde decides to clothespin up his nasal passage. I mean, skunks only spray when scared, whereas a cat has an unpleasant stench that will follow him beyond death. (THAT sounded a lot more cruel in my head.)

Favorite Part: When Junior sees his parents again in months. Mainly because, when I first saw this short back in the day, I really thought he was going to have forgotten them, and the rest of the picture was going to either be the two trying to escape, or trying to remind him of who they were. It was a heartfelt swerve.

Personal Rating: 4. It’s a sweet story. And I love how Junior knows he’s adopted, and it doesn’t diminish his love at all. Sometimes, your real parents are the ones who don’t throw you out of a moving vehicle.