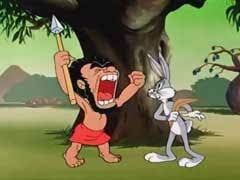 Bugs is a park dweller today. Most of the time, it’s a very peaceful place to live. No guns, no predators, no playing in the fountain… but today is different as Bugs is being watched by a very creepy Italiano who was never taught the meaning of “personal space.” (Kids, if you ever see this guy handing out balloons, run. Run and scream!) He would like it very much if Bugs would hold onto the balloons he sells whilst he ties his shoe. Bugs is happy to oblige, but being much lighter than the man allows the balloons to take him away from the reassuring grip of gravity. Once Bugs realizes this, he’s too high to let go. (No giggling.)

These are some quality helium balloons! Bugs has traveled from L.A. to Hawaii and still they persist. (Well worth the 25 cents. Just keep them away from the ocean, please.) If world geography has taught me anything, then Australia should be the next noteworthy location Bugs will fly over. And there it is! (No Zealand, though.) Bugs isn’t the only one up here; a stork is also heading down under to deliver a kangaroo joey. Looking nothing like how a newborn one of them should look. Shall we compare?

That darn stork union. When they’re not drunk off their tail-feathers, they show up six months late. After both Bugs and the bird enter the same cloud, there’s a bit of a mix-up. Bugs is now the one being delivered, while the joey is having the best birthday ever. (Nine balloons with super helium? I always knew my parents hated me.)

Delivery time! Mama roo is instantly smitten with her “child”. So big and strong from day one! All the other marsupials in her bridge club would sell one of their uterus’s to be so lucky. Bugs wants no part in this. (And he’s got to be seriously concerned that McKimson keeps making this happen to him.) But Bugs’s biggest weakness calls him back: the tears of a female. He agrees to being her child, and she happily pouches him up for baby’s first ride.

Australia is no stranger to dangerous animals, and the deadliest one of all has the two in his sights: man. An aborigine who is either hungry or a sportsman, follows the two with the best weapon ever: a boomerang. If he misses, it will just return to him. But a direct hit is gonna hurt. Bugs learns this fact the hard way. He gets in a shouting match with the man, (dubbing him “Nature Boy”) and I can’t make out what they’re actually saying, but Bugs must have called the guy some really good words, as it really rages him up.

He thinks he has Bugs in a hole at the mercy of his spear, and Bugs does the ole “You killed me and I’m dying” bit. Unlike Elmer though, he has no remorse and happily continues to stab. (I do love hearing Bugs say “Just go away and let me die in pieces.” Why don’t I hear kids quoting this line? You are shameful parents.) Perhaps the lack of sympathy from N.B. is why Bugs angrily kicks him in the hole himself. And tickling him? That’s cold, man. Natechy tries to shoot something poisonous with a blowgun too, but Bugs beats him to the draw and blows it down his throat. (Not as cold, for some reason.)

It’s Kanga who finally gets the best of the the aborigine and boots him off a cliff and out of their fur. Even better news? Those balloons have finally started to lose their power, and her biological baby drifts down to her glee filled arms. The two are happy to give Bugs a lift back to the U.S.A. and attaching an outboard motor to her tail makes for a nifty little boat. (As for me, I don’t think I’d be comfortable sitting in her pouch that long. I’ll just stay here.)

Favorite Part: I’m a sucker for displays of motherly love, so I adore seeing the kangaroo not taking guff from Nature Boy. Soon as she sees her adoptive son is in danger, she shows why you don’t piss off an animal that has feet large enough to function as water-skis.