“This is what I get for dweaming of a white Christmas.” 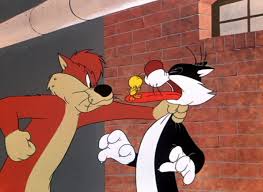 This short starts with Tweety singing his theme song. After the intro, we see it’s winter and Tweety has been spotted by Sylvester and an orange cat whose name would later revealed to be Sam. They both grab the bird, but there is not enough for the both of them. They fight and eventually end up in a basement. Tweety sees a toy dunking bird and mistaking it for a real bird, tries to make friends, Orange makes the same mistake and eats the toy.

The two putty tats fight and they end up outside again. They see a hole near a sign that says “thin ice,” with Tweety’s hat beside it. In reality he is picking a circle around the cats and they fall in the water. (“thin ice,” my butt) We end with the cats both suffering from colds. Probably dreaming of the cream of Tweety they don’t have.