Animation by Isadore Freleng and Paul Smith; with Abe Lyman and His Brunswick Recording Orchestra. A Merrie Melody released on October 3, 1931.

Well, seems Walt wasn’t too fond of characters looking an awful lot like his own Mickey. Because of this, Foxy would only appear this “one more time.” Well, until he would appear decades later on Tiny Toons. By then people were extra careful to make him look different from a mouse. With pointier ears and snout. (But at least he wasn’t as blatant a rip off as Milton Mouse.) 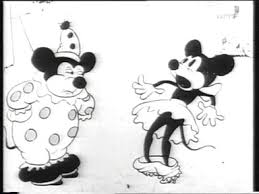 (Disney may have killed him off rather quickly, but he’ll live forever in my nightmares)

For his last appearance, Foxy is a cop. And he patrols some pretty nasty streets. He is nearly killed several times. Either by being hit by car or just flat out being shot at. But he’s not unarmed. He has a gun that fires a mouse with a hammer at assailants. But even the non-criminal citizens are causing some trouble. Another hippo (this one speaks mostly in “wahs”) is having some road rage with another Mickey clone. (They are popping up everywhere today) Eventually, she accidentally runs over Foxy and he gives chase.

When she pulls over, she begs and pleads to not be given a ticket. Foxy doesn’t really buy her story, but he does forego on the ticket. (Instead, he just shoves her head in a trash can.) Roxy is making one more appearance too and her dog happily greets the scared vulpine. (Being several years before Disney would prove that a fox and a hound could get along, you can understand Foxy’s terror) The three take a break to enjoy some impromptu music.

Another hippo, meanwhile, has just been robbed. The cops give chase, with Foxy leading the pack. The criminal may seem pretty small, but after entering a pipe, he is not only larger, but accompanied by three other crooks. A grenade is hurled that takes care of the other officers. (I think it kills them. It at least knocked the flesh off their legs.) They also fox-nap Roxy which just gives Foxy even more reason to give chase. He takes a robot horse from a penny arcade and gets her back. With the criminals now chasing him, he tricks them into running into a prison. But he hasn’t completely won. The driver managed to escape and shoots Foxy in the butt. (What a way to make your final appearance!)

2 Replies to “One More Time”