Animation by Isadore Freleng and Max Maxwell. A Looney Tune released on September 18, 1933.

Bosko is such a musical fellow, it only makes sense that he’d have a job supplying music for entire audiences. And in the era where silent movies were still in the public’s memory, (and a few were still around) we find him playing the organ for such a venue. And he invites us to sing along! So join in the fun! “We’re in the money!” is what we’ll sing.

Please tell me you sang. We love music around here. After such a fun opening number, we sadly have to tone it down a bit and see a news reel. A peace conference is in effect. Look at the pummeling! (Things must be getting better.) People still flock to California’s beaches despite the snow, and a boxer plans a comeback, even though he needs at least one arm to hold his walking stick.

We see footage from a dog race. (Which in itself is taken from “Bosko’s Dog Race”) with the Marx brothers playing a role as dogcatchers. (Odd. But at least they allowed Zeppo to join in the fun this time) And after being told that a famous screen lover is on a European vacation, we get a really weird joke about Hitler chasing Durante with an ax. (…wha?…) Back to the fun things! How about a Haurel and Lardy short? I think Haurel is the fat one, because it would be too obvious if he was Lardy. Today, they are going to steal a pie off a windowsill. But they get to arguing who will eat it, and Lardy smashes it in his friends face. In turn, he is smacked on the head. (And I don’t think his collar has a shirt attached to it, but that’s just me.)

Time for the feature film. A TNT picture called “He Done Her Dirt. (And How!)” Starring Bosko’s girl, Honey! And I just realized that I never gave her a proper post, so let’s do that now.

Honey was Bosko’s girlfriend. She was born to be a love interest and that is all she ever was.

What? What do you mean that doesn’t count? It’s my website! She fits my “five appearances rule” but she doesn’t have enough character to warrant description. She was made to be a love interest and that’s all she ever was. (part 2) She was just Bosko with a dress, high heels, eyelashes, and a bow. (Neither of them was known for wearing shirts.) But if you really need more Honey in your life, here’s a shot of her when she appeared on “Tiny Toons” 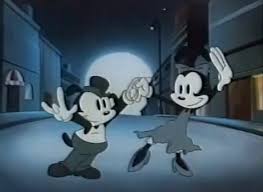 As you might have guessed, the “black person” angle wasn’t going to go over so well in the nineties, so he and Bosko were redesigned as generic dog creatures. (And they had the audacity to claim she was Warner Bros. “first female star.” There was no such thing. Sexist it may be, but people tend to freak out if a female receives slapstick.) Let’s return to our regular post, shall we?

Honey is riding a bike. (And the Marx’s are there again. They heard me say “generic dog creature” and needed to check it out for themselves.) The villain of the piece is called Dirty Dalton. Hey, wansn’t that also the name of a Hanna-Barberra character? 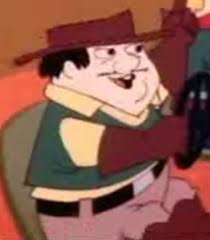 I already knew it was. You didn’t need to add that, me.

As I was saying, Bosko is not too keen to see the villain. I know what it sounds like, but I swear he says “The dirty fox.” (Whats this in the gutter? Why, it’s your mind! You should really keep it out of there) Bosko is loyal to his soulmate and is going to save her, whether it’s reality or not. He jumps through the screen to rescue her. Normally, that would result in him entering the movie, but real world rules are applied this time, and he just tears a hole in it. At least, that seemed to work.

One Reply to “Bosko’s Picture Show”