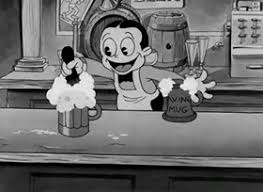 Leon Schlesinger was a real joy to work for. He left his employees to do what they wanted as long as followed his demands. This did lead to some drawbacks, though. For example, directors were not given the credit they so richly deserved. Instead, they were given the rather meaningless honor of “supervisors.”

Yes, Leon had his good and bad points. Unfortunately, his bad points would often drive some of his best employees away. (I’ve already discussed the tragedy that was known as “losing Tex Avery” At least he still had success over at MGM) Years before that happened, he would lose Harman and Ising. (Who also went to MGM. That’s just where people went when they were done with the WB. Even Freleng did that at one point. Happily, he came back.) But since they were the ones who created Bosko, they took him with them to the other studio. And yes, Bosko had a few MGM shorts made. How was he looking? 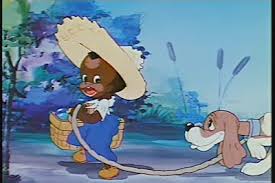 Without his “star” (Bosko may have been entertaining, but he never was able to compete with the mouse or the flapper) Leon needed a new character. But why should he design one? He’s the boss. So he lured out animators from other studios. (With bait I suppose. He probably just attached a string to a piece of paper that had “Draw on me.” written on it. Pulling it along, he’d easily get his prize.)

One of these animators came from Disney. He was Earl Duvall. (Pretty prolific in the field of drawing. Working on both the Mickey Mouse and Silly Symphonies comic strips.) He designed Buddy. Buddy, (I’m sorry to say) doesn’t really have any character. He is just sort of bland, big-eyed, and always smiling. He’d probably work a lot better as a comic strip than an animated toon. (Call it “My bro Buddy.” And it could be about Buddy and his brother…Boy.)

No. Back in your kennel.

Yeah, Buddy wasn’t the star Leon was hoping for. His cartoons are still fun to watch, but they really needed a better lead role. At least for his sake, Buddy had a girlfriend. Her name was Cookie. (Warner Brothers toons like women with “sweet” names.) She might have even less character than Buddy. That’s a shame.

Today, Buddy is one of the lesser known characters. But he still has lived on a wee bit. (I swear there is a picture of him in Space Jam.) But his biggest feat was appearing on Animaniacs. 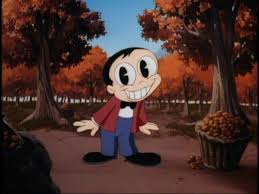 Don’t let that smile fool you. Here, it was said that the Warner siblings were added to his shorts to make them actually funny. That mostly meant having him get hit with giant mallets. This promoted the kids to star category, and Buddy was forced into retirement. He blamed them for ruining his career, and tried to axe them off. (He failed.)

Despite all the negativity I’ve spewed, I can’t say I hate Buddy. If he wasn’t forced to be rushed, maybe he could have been halfway decent. Good try Buddy.