Another nice moment of me meeting someone who appreciated my Looney attire. A girl admired my shirt depicting Bugs as the Sorcerer’s apprentice. She agreed that Looney Tunes and Fantasia are two of mankind’s greatest achievements.

What do I care? I’m the boss of this place and I get to have my way! 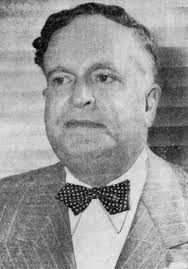 Born in 1884 in Philidelphia, Leon Schlesinger (suh-les-in-jur) would have many different theater jobs as he grew older: usher, actor, even manager. In 1919, (which would put him at about 35) he founded Pacific Title & Art Studio. Most business there was producing title cards for silent films. But silent films didn’t last forever and when they were flat out replaced around 1929/1930 Leon looked to find a new way to capitalize on this newfangled “talking” technology, and therefore, stay in business.

Some believe that Leon helped to finance “The Jazz Singer” and that gave him a connection with Warner Brothers. Regardless of how he ended up with them, he was able to secure a contract with the studio. He was going to produce a brand new series: Looney Tunes. All he needed was some animators. As luck would have it, Universal had just lost two men named Hugh Harman and Rudolf Ising. (Such wonderful last names! It had to be fate!) These two wanted to have their own studio where they could make cartoons out of their character: Bosko. Leon gave them that opportunity.

Leon was first and foremost, a businessman. And that meant that he was going to pinch as many pennies as he could. A budget dispute led to his harmonizing cartoonists leaving him for the greener pastures of Van Beuren studios. But Leon would not be deterred. He set up his own studio on the WB lot, and lured animators away from rival studios. Some of which had already left with the Hugh and Rudy. (Bob Clampett for example.) One animator was promoted to oversee production of Looney Tunes as well as develop the sister series: Merrie Melodies. This man’s name was Friz Freleng.

Freleng had definite talent; and the studio got even better with the hiring of today’s legends like Tex Avery, Chuck Jones,  and Frank Tashlin. The final pieces needed to make masterpieces were music director Carl Stalling, and beyond talented voice actor, Mel Blanc. Leon was not involved with the cartoon process. He had only two rules: 1. Put in plenty of jokes. 2. Meet the deadlines. As long as they were successful, he was happy. This led to freedom that wasn’t found at other studios, making Looney Tunes and Merrie Melodies a blast to watch.

But Leon’s cheapskate ways continued. Freedom came at a cost, and his animators worked in a studio that one would call: dilapidated. (And that’s the nice way to put it.) In fact, there were plenty of kinda dumb decisions he made. Unionized employees demanding pay raise? Shut the studio down for a while. Disney and MGM seemingly getting preferential treatment at the Academy Awards? Boycott the Oscars. (facepalm) Leon was not an easy man to work with. He was pretty conceited and not very grateful. He had a yacht, and he’d be damned if he was going to let …ugh… employees on it.

The public got to see Leon when he appeared in “You Ought to be in Pictures.” Considering what he was like in his professional career, it is a little jarring to see him seem so jovial and friendly. (Maybe it’s just because he is talking to Porky. Everyone loves Porky. RIGHT?) In later years, he would also have his caricature featured in other cartoons, like “Hollywood Steps Out,”  and “Russian Rhapsody.” (No idea whether or not he was flattered to have his face immortalized in art.)

Leon would remain the head of the studio until 1944. Then, he decided to sell his assets to Warner Bros. But he did continue to market the characters until his death in 1949. Christmas, 1949. (That’s the best day to die, and the worst day to lose someone) With the studio in the W.B.’s hands, Eddie Selzer took his position as producer and would hold the title until his retirement in 1958. If you want to visit Mr. Schlesinger today, he can be found  in the Beth Olam Mausoleum in Hollywood Forever Cemetery.

He may not have been directly involved, but this man was a key player in helping get Looney Tunes their start and allowing them time to make some fantastic animated shorts that would be remembered for years to come. Here’s to you Leon. I’d happily stay off your yacht any day.