This is actually a rather important cartoon for the good ole’ WB. You may not notice it right away, so I’ll just tell you. It’s all on the piece of mail Egghead is reading. This was the first appearance of ACME! The greatest “sell anything” company since… well, I suppose it was the first, and nobody else has ever been crazy enough to sell such content. That makes them number one to this day!

Back to business, the ad Egghead is reading promotes some boxing lessons (equipment included, ACME cares about its customers). What really hooks Eggy, is the ad challenging his masculinity. He can be a man or a mouse, and mice don’t box, do they? 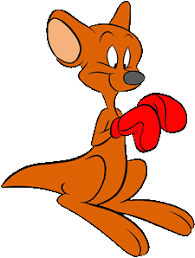 Then I guess Egghead doesn’t have to prove anything. But what fun would that be?

He orders the kit and almost immediately gets it. (The delivery man would have been there sooner, but the bridge was out.) Time to get to work! There’s all sorts of nifty gear to make you the champion boxer of the neighborhood! Instructions relayed to you by a Mel Blanc narrator. The most basic rule of boxing is knowing how to punch, so that’s a good starting point. Egghead may not look like he’s got a lot of strength, but he can really hit that punching bag! In fact, it won’t stop swinging when Mel tells him to stop. (Egghead has no choice but to shoot it)

Like any sport, you can’t have offense without defense. (Otherwise, you’d just be getting payed to bully others) Next, will be lessons on dodging. The kit comes with a nice wall of gloves that will try and give you a good socking. Dodge them! Egghead does just that, and the instructions deem him ready! He’s a real boxer now, and real boxers right real matches. (Believe me, I’m tempted to put in joke about real Boxers [the dog breed], but I can’t make such a bad joke if you’re expecting it!)

He must have the right kind of connections, because Egghead is booked to fight the world champion, Biff Stew. Oddly enough, Egghead is the only person in this short who isn’t an anthropomorphic animal. (Then again, I’ve never been entirely sure that he wasn’t a hooded seal.) 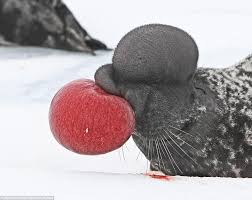 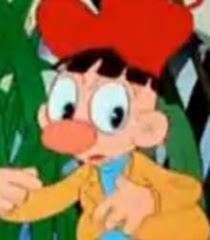 The referee is being played by Tex Avery. (Doing that oh, so enjoyable laugh he does. You can’t help but join in.) And the fight begins! Egghead does have some agility on him, and he lands several jabs, but it’s kind of like a grasshopper hitting an ox. No fazing is going to happen. It’s not long before Egghead is getting his rear handed to him. (So dazed is he, he thinks he is Charlie McCarthy at one point and takes a seat on the champ’s lap.)

He can’t just quit. Oh, don’t think he wouldn’t try! Biff is just not going to give him that luxury! They are fighting to the death! Biff might have overdone it on that last punch though, as after stretching the ropes as much as possible, (Egghead comes close enough to kiss! Any desperate people in the audience tonight?) he comes back and knocks Biff off his feet, and onto Eggy’s body. Only one way to get that lummox off, a bite! The galoot flies up, and comes down, the impact dragging the rest of the ring down with him. Could Egghead go down too?

If he was actually there! Turns out Egghead was knocked out by his dodging wall, and dreamed the whole thing up. Dream or not, he’s convinced that a fighter’s life is not for him and he throws everything out. (Except the wall, which gives him one more punch.)

Favorite part: After a grueling exercise, Egghead pants. The record tells him to not have his tongue hanging out, because we’re watching him. (Glad I didn’t have to say it.)