We now come to the year 2020 A.D. The year of hindsight. I’m well aware that I’m not even close to being the first person to make such a joke, but I will use it to tie into today’s post, where I’ll ask this question: “Was this character a good idea?” 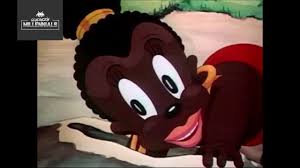 This is Inki. He is a young hunter. At least, that’s what he tries to be. For most of his pictures, he doesn’t seem to be very capable. (Like all Warner Bros. hunters) And you probably noticed the thing that I’m not bringing attention to: he looks like a girl. (At least, that was my first thought when I saw him.) Really, its the rest of him. The large hooped earrings, the loincloth, and the prominent lips. All are signs of the stereotypical African. Yet, the audiences never found him too offensive. (For one thing, it’s never outright stated that he is from Africa. Kid never speaks.) It was the higher ups that figured he shouldn’t be seen, and that accounts for his obscurity. (Even though none of his pictures crack the “Censored Eleven.”

As the title of the post suggests, he is only one half of a comedy duo. Thus, I introduce his co-star: the Mynah Bird. 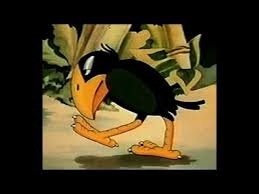 What is widely known about Mynah Birds? Their ability to mimic human speech, of course. Forget that. This bird is as silent as Inki. Not only that, but he just might be the Looney Tunes biggest bada$$. Nothing rattles this passerine. Whenever he makes an appearance, he looks straight ahead, skips to the tune of “The Hebride Overture” and prefers not to interact with anybody. Naturally, this tends to get the attention of everyone nearby. (Although, many flee in terror when he’s around) Woe betide anyone foolish enough to tangle with this bird. He can do things. We don’t see how he does it, but he can hurt, humiliate, and sometimes even help others. (But don’t try thanking him. He doesn’t want to put up with you.) So cool.

Inki may have fallen into obscurity, but the bird still made the occasional appearance later on in life. Making cameos in “Tiny Toons”, “Animaniacs,” and “Tweety’s High Flying Adventure.” (He’s less likely to tie knots in the panties of oversensitive folk) Really though, as a Looney Tune-iseur, I’d recommend giving the cartoons a watch. They really aren’t as bad as appearances might lead you to believe. (They were done by Chuck Jones. THE master of the silent slapstick.) But the real reason I think they are great? That bird is clearly my spirit animal. (He’s not the only one people tend to run in fear from. Probably for slightly different reasons, though.)