Another one of nature’s most impressive creatures, IS the beaver. To think, these rodents aren’t just smart enough to make a home for themselves out in water, so their predators have less of a chance to feast on them, but even go so far as to dam flowing waters to make the still bodies of H2O they need. Even using the materials as their food source to boot! It’s fantastic! And furthermore, it’s unbelieva-

So, as I was saying, beavers deserve a cartoon of their own. 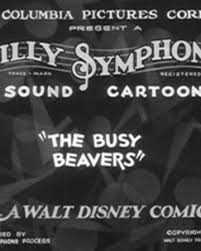 You know what? These guys deserve two!

Beavers are always busy, right? As long as the camera isn’t on them. Then they leap into action doing what they do best: chopping down trees. (An interesting method they use, is setting one another on ice blocks, to make their teeth chatter. Then they can be used like chainsaws.) Then, they remove the fallen wood of any parts that might get in the way. Excess bark, twigs, that sort of thing. So they just use a corkscrew to get the smooth, creamy, centers out. Then they are ready to be part of the dam.

Out title promised one who is especially eager, and here he comes now. He’s easily identifiable by the ski cap on his head, and lack of voice in his mouth. He wants to join in on the work, but finds it a bit too crowded. (The beavers have also upgraded to axes for the rest of the picture. Technology is so cool.) He opts to chop at the tree that no beavers are working on. (Probably because it’s a telephone pole. An easy mistake.) Guess he has no choice but to get in the fray.

He joins in, but makes himself a nuisance. The beaver he is bothering sends him off to chop down a tree quite a distance away from everyone. On top of a mountain that no beaver has ever dared climb before, due to lack of water and un-lack of eagles. But Eag is so eager, that he knows no fear and rushes to do his duty. But this tree has seen it all, and is more than a match for a puny axe. Even dynamite does nothing more than blow away the surrounding dirt. (Gee, if only he could chew it down. But that wouldn’t be much of a climax.)

The other lodge members are still working, when a bird comes bearing dire news: there’s a flood approaching! If these guys don’t have a dam ready, the forest will be underwater! It might sound nice at first, but even a beaver can’t swim for all eternity, they’ve got to move fast! Maybe Eag could save the day? He’s finally figured out how to get the tree down: chewing! Good thing he had termite on paw. Thanks to the insect, the tree comes down. Right in the flood’s path. He may not be built for running, but he’s so eager, that he not only outraces the flood, but gets the tree in place just in time! He’s saved the day! He’s everyone’s hero! Just goes to show, just leave it to Eager Beaver.

Favorite Part: When Eager first tries chopping down a tree, a dog begs him to spare it. (Moderately funny.) Because he has a bone buried there. (Nice misdirection!)

Personal Rating: 3. (This cartoon is full of that nice “smear animation” that Chuck used so well in “The Dover Boys.” It still looks rather amazing.)