“Don’t be so reluctant, Dragon!”

Supervision by I. Freleng; Story by Tedd Pierce; Animation by Manuel Perez; Musical Direction by Carl Stalling. A Merrie Melody released on May 15, 1943.

Fishing. A nice way to sleep and use the lack of fish biting as an excuse. Unless of course, you’re one of a rare few who actually LIKES wrenching a cold, slippery, wide-eyed, innocent animal from its natural habitat and either eating it, or mounting it on a wall. (Or the even rarer one’s who catch and release. They’re my favorite.) Our mystery fisherman of the picture is probably the “eating” type, as he sends his line down with a serving platter.

He has some bait as well. Believe it or else, this worm has a bit of a history. This short actually marks his second appearance! (Out of two.) He previously debuted two years earlier in “The Wacky Worm.” Which is why we’re going to call him “Wack” from now on. It makes me wonder why Freleng didn’t try to develop any more pictures with this worm, seeing as how this one here is an Oscar nominee.

Wack has a mustache, so in Warner Bros. fashion, he talks like Jerry Colona. Upon reaching the bottom of the water, he makes himself a sandwich. By which I mean, he makes “himself” a sandwich. He’s one of those animals who’s happy to be a part of a fishing team. Like these two were: 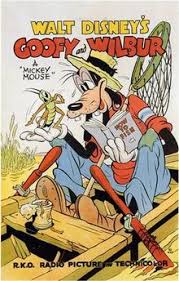 Of course, that doesn’t mean that Wack is suicidal. As soon as a fish tries to partake of his wacky flesh, the worm darts away, and gives the line a tug to reel in the goods. Switching out the small (but not literally) fry for a bigger catch on the way up. One fish, is that enough? Not for out mystery, fish-tory, man. Down Wack goes for part two. Fish is fish, so he has no qualms about trying to lure in one of the “lesser” varieties. This guy clearly has more mercury inside of him than a shark; if his mannerisms are any indication. He’s not even smart enough to try and take the bait. He’s gotta be fooled into thinking taking the hook is a circus act. (Seriously. Don’t put that guy in your mouth.)

As is befitting his “Wacky” name, out worm is willing to dress as a mermaid to get the fish’s attention. It works, but it isn’t his boss pulling the line up, but a crab instead. Wack almost loses the latest catch in the crab’s digestive tract, before correcting himself. The crustacean isn’t too pleased to be cheated out of a free meal, and chases the little guy. (I figured this was all taking place in freshwater, but the appearance of seahorses says otherwise. I can admit I made a mistake.)

Wack accuses the crab of only being tough due to it’s exoskeleton. (It does make up for his lack of a spine.) Good thing, that as an arthropod, he can shed it to prove the mouthy annelid wrong. Wack turns to us and admits that the following fight isn’t going to be pretty. In fact, the camera is going to return to the surface while he takes on his clawed foe. (Not cool. I had bets to pool!) After our thrashing  subsides, the loser is reeled in. Seems pride really does come before a fall, as Wack is the loser. (And our fisherman is revealed at last! Who else would make use of Colona-worm, than the human Jerry, himself?)

Favorite part: Probably what got this short it’s chance at Oscar-dom. (Oh well. Donald earned it this year) When Wack is being chased, each of the crab’s eye-stalks view him around different corners of a chest. We actually get to see what each eye sees! Wack running away from one, and closer to the other! It’s art!

Personal Rating: 3, as a whole, but the eye segment earns a four on its own.