Welcome to Alcarazz prison! Thought there was no such thing as a “bad” dog? Well, I still say there isn’t, but this short is full of canines who are incarcerated for some reason or another. (Maybe this is just a pound, and this is all seen from a pup’s point of view?)

We don’t have any named characters, or at least, not yet. Our large thug of the picture shall now go by: Julius. Which naturally leaves the small comic relief as: Ben. Don’t be fooled. Ben may look innocent enough, with his tiny frame, oversized clothes and squeak of a voice. But he’s in here for a reason. He snapped Dinky Doodle’s neck! (Mostly because he was the only person small enough.) These two have a bit of a running gag: Julius does something to rile up the guard, and Ben takes the punishment, all the time, every time.

We’ve also got a warden who doesn’t factor much into the picture, but he is a caricature of Hugh Herbert. So, he has that going for him. I like him. (He’s silly.) He seems really into his job. Happily waking up the inmates, and believing their blatant lies about who dug the holes in their cells. (Mice, my tail. Rats, maybe. Groundhogs? Possibly. Capybaras? By all means!… I’m rambling again, aren’t I?) There’s even a joke about one prisoner begging not to be taken to a chair, despite being told it’ll be over very soon. (Turns out, it was a barber chair. But admit it, you didn’t know that right away.)

Still, nice as it may be inside, a prison is a prison. Julius wants out. (His crime was a lot less impressive. He just shot Scrappy in the arm.) 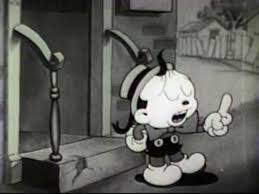 He plans a riot for 2 ‘o clock. Good thing the dogs are allowed at least two guns per person in here. They let loose at the allotted hour, and Julius uses it as a cover to make a break for it. He’s almost immediately caught. What else can he do, but sing? It actually does work! I mean, the guards don’t put up much of an effort to stop him, and they get locked up to boot, but Julius is able to wish the warden farewell to his face. (Note to self: a song can get me out of work. Acapulco, here I come!)

Scratch those plans. It works for less than a minute before Warden Paws realizes the severity of the situation. His boys set off to bring the rascal back, and they manage to do it too! All too soon, Julius is back in the can, but now with much more security to keep him inside. Still bitter, he clubs the passing guard over the head. Ben is cleaning outside the cell, and he knows that he’s going to get the punishment yet again. If that’s the way it must be, he does it his way, and punishes himself. (With behavior like that, he’ll make parole in no time!)

Favorite Part: Warden Paws. He could make Death Row jolly! (And he probably does!)