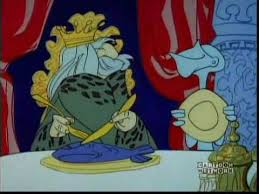 This post would not have been possible, without contributions from Mr./Mrs./It’es AX. I thank you for your help.

Once upon a time, there was a couple. (But a couple of what, I couldn’t tell you. I think they’re humans.) George and Prunehilda Thumb are their names. George is quite content with the way his life has turned out, but the Mrs. doesn’t share those sentiments. She wants a child, and subtly hints this to her husband by knitting enough booties for all the infants in the world of 1963. Even then, George refuses to put out, (okay, so maybe she’s just impotent.) so she has to contend with making the local animals wear the garments.

Once upon a later time, a magician walks by their place. His name is Ralph K. Merlin, Jr. (He has that name because his mother married a Merlin, and he couldn’t be more creative when naming his child.) He’s actually quite skilled. His hiccups have the extraordinary ability to transform himself into other things. Dragons, cows, prams, babes, and cars, all with two legs! But he can do intentional magic too. He just so happens to hear Pruney making her umpteenth wish for a child, even willing to settle for one that’s the size of her thumb. Mr. Merlin decides to help out, and impregnates her with magic. (So, does that make him the father then? Or did he magically transfer some George juice into the lady? Am I ruining this picture for you? I’m sorry.)

She knows. She immediately knows. The cartoon has proved my theory that females always know the instant they are expecting. (One of the many superpowers I’m convinced they have.) She tells her husband she believes her dreams are going to come true, as the magician leaves. (Still hiccuping, still changing.) Some time later, her son is born, and he is indeed, small enough to warrant his last name. (I’m not sure a baby that size would require nine months to cook, but I’m also not entirely sure how magical insemination works.) George may be a bit shocked, but he’s good father, regardless and helps raise the child.

But you know what is the hardest part of having such a small child? Cats love to eat babies. It’s a well known fact, but most of them are so big, that the feline can’t get much more than a bite before the child’s screams alert the parents. It’s not everyday a cat is able to locate a child that requires only a swallow. The cat sneaks outside where witnesses are near zero, and attempts a snack. Swoop! Grasp! A bird takes the child for itself. Birds love babies, and loathe cats, but are known to drop the former. As long as there’s no water below, I’m pretty sure, Tom will survive.

Water? On this planet? What are the odds? Well, as long as there’s no fish-Oh no! A fish! Fish love babies even more than cats do, but eat them less because of the whole “most of them can’t breathe out of water” thing. (Someone really should wake a horror movie about walking catfish. It’d scare me.) Tom looks like a goner, but that fish just so happens to be the same fish that was caught for the local king. And either the king likes them raw, or the oven’s flames couldn’t harm Tom through all that flesh. Tom is alive and is found by the king.

The king decides to shower this child in luxuries. I guess he’s swayed by how cute Tom is? (Mr. Jones is well known for drawing cute infants.) Eventually, Tom is made a knight and is capturing dragons and defeating giants with the best of them. (Small dragons, you understand.) Eventually, Tom marries, and he and his wife have a child of their own. (I’m glad the stork is always a viable option in cartoons. I shudder to think how things would pan out otherwise.) Ironically, Tom’s child is the size of HIS thumb. And this continues down the line, with each following child being the size of the parents opposable digit. (Might want to stop, guys. Things could go too far.)

But whatever happened to Tom’s parents? Well, I guess Prunehilda is still unintentionally cheating on her husband with magicians, because she’s taken to knitting again. This time though, the booty is bigger than she is. (She’s probably just messing with George.)

Favorite Part: When the king decides he’s going to give Tom the good life. Knowing that his decision is random at best, he sternly declares that nobody argue with him.

2 Replies to “I was a Teenage Thumb”