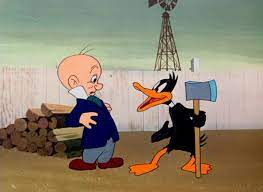 If the gray skies, red foliage and migrating ducks are any indication: Autumn is here. Dafffy does his best to keep up with the rest of the flock, but ultimately goes down. He calls out for help, and surprisingly enough, he gets an answer! Wait… I know that voice! That’s Elmer J. Fudd! And he’s not confused; he knows exactly what he’s doing. He gets Daffy down on the ground, and aims his gun.

Daffy isn’t too keen on the whole dying idea, and offers up an alternative: slavery! Elmer spares his life, and Daffy waits on him, wing and foot. (And seeing as how Daffy IS black, he’s not above a quick reference to “Uncle Tom.”) Elmer as it turns out, is totally on board with the idea. (As every single human being secretly thinks. Don’t deny it)  The deal is made, and the two head back to the homestead.

Elmer is about to give himself a shave, when Daffy interrupts. Seeing as how he’s the slave, he’s the one who gets to remove Elmer’s hair. (Seeing as how he’s a bird, Daffy is probably fascinated by the stuff.) He starts with a hot towel. So hot, that he ends up steaming Elmer’s face off. He puts it back where it belongs, just upside down. (Elmer frowns, but since his face is still the wrong way, he’s technically smiling. I can’t say I blame him. If I had unlimited wishes, number 5 would be to have my face upside down.)

Now for the actual shaving. It looks like Daffy knows what he’s doing, but it isn’t long before he’s asking for various surgical tools. (Elmer just has plasma in his bathroom does he?) Elmer has come to realize that slavery is, and always has been, a mistake. So he decides to kill Daffy. (Letting him go? That’s an odd suggestion.) Daffy is able to get another pass by making Elmer a meal. But he has to give the ole “it might be poisonous” shtick a try, and eats every bite. (I hope that was chicken.)

Killing time again! Daffy saves himself this time, by offering to chop wood for Elmer. The tree he chose falls on Elmer’s neighbor’s domicile. Seems he doesn’t mind though, as he just asks to borrow Elmer’s hammer, friendly like. (He just wanted to hammer Elmer’s head, but it was still a kind way of asking.) Daffy uses this time to escape, so Elmer sics his dogs on the duck’s trail. They might not look like the most focused ones you could send on this job, but they’re organized. They stop and make plans and everything.

After a botched first effort, (lousy tree) they succeed in bringing Daffy back! (That’s…wow. I never should ever doubt a dog. These are, after all the same animals who were smart enough to come up with the idea of adopting humans as pets.) Daffy’s way out of this one? Play up his blackness once more, and beg Elmer not to whip him. (The DVD that this short can be found on is available at the library I work at. In the children’s section. I laugh every time a child checks it out. Even though I support that choice. Better than “Paw Patrol.”)

The second part of his plan? Daffy returns as Lincoln and angrily tells Elmer off. (Silly slave owners, whips are for cream!) Guess that’s all that was needed, as Daffy leaves. (Huh. Kind of a weak ending)

Favorite Part: When playing surgeon, Daffy keeps asking for more and more ridiculous requests. When Elmer gets fed up and points a gun at him, Daffy simply reminds him that that wasn’t what he asked for. (I thought it was funny!)

Personal Rating: The great gags get this cartoon a 4 from me, but if you can’t see past the racially insensitive bits, then it’d probably be a 3.