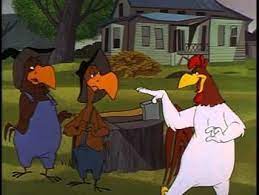 Cold is bad. Cold equals death. Foghorn is the wisest chicken this side of Aardman, so he knew enough to get south once the weather turned on him. Since he can’t fly as well as a duck, he uses one to pull his balloon basket. Taking note of the magnolia scent in the air, he figures this must be his stop and he leaps out via the Mary Poppins approach. He came well packed with all one needs for a vacation: a comfy chair, and a table to hold a drink. (The mint julep is a cute touch.)

But predators are a worldly thing, and there is a couple in that tree just yonder. If you’ve watched every Looney Tune and Merrie Melody in chronological order, then you’d recognize these guys. If not, I’ll introduce you. They are Pappy and his son, Elvis, two raptors of indeterminate species. I call them that because they were turkey vultures in their first picture, but have shrunk down to chicken hawks for this, their final appearance.

They’ve been subsisting on black-eyed peas for some time now, and Elvis is really craving a chicken. The lack of them is all that is keeping his wildest desires from coming true. They take note of Foghorn and are ready to have themselves a good old fashioned BBQ. Foghorn isn’t too pleased to wake up to someone plucking his feathers off, but he finds even more to complain about once he finds out what is on the menu for dinner. (I hate hearing people complain on their vacations.)

With their dinner on the run, Pappy chases him down telling Elvis to shoot him with the gun they have. Elvis has been trained to fire when ‘fire’ is said, and unfortunately for his father, Foghorn knows this. This calls for dueling pistols. Foggy almost immediately gets the guns into the wings of the two, and tries getting them to duel. But what makes these guys fairly amusing is that they are fairly intelligent, and they both shoot their prey.

Foggy tries to get rid of them by claiming there is a tornado on the way, and nailing them in the storm cellar. Then the actual tornado hits him. Foghorn decides to take shelter in an explosives shed. The other two follow him and Foggy leaves them in there with a light. The resulting explosion sends the raptors back to their nest. They decide that the peas will make an adequate dinner after all.

Favorite Part: When in the shed, Elvis asks his father what T.N.T. spells. A very unique way to discover and announce your doom. I hope I can go in a similar way.

Personal Rating: I want to give it a four. There are some good jokes that even manage to subvert your expectations at times. But I don’t know, are the adversaries racial stereotypes? Let me clarify: offensive racial stereotypes? I enjoyed them and didn’t think they were hurtful, but I’m naive and scared of someone accusing me of being insensitive. It’s gotta stay a 3.