Animation by Rollin Hamilton and Larry Martin. A Merrie Melody released on September 10, 1932.

Late at night, a tipsy bee heads back home. Since he’s been drinking, he can’t let the wife know that he’s there, and tiptoes into their room. They cut the sneaking crap fast, and his clumsy klutziness wakes the girl up. She is none to pleased to find Rupert (her husband) has been at the spiked honey again. (I’m a calling her Hunny. Objections? I’ve got none.) There’s no time for reprimanding him though. (Her antennae turn black.) As the female, it’s her responsibility to go out and make honey to make dough.

Outside (where her antennae have decided to stay black) she sets to work. She’s definitely got an interesting method of gathering nectar. She separates the lower half of her abdomen, and uses it like a bucket to scoop out the sugary sweetness. Kind of like an enema as thought up by David Lynch. I’m torn (get it?) between laughing my butt off and puking my guts out. And then comes the rain…

Bee’s can’t fly in this kind of weather. In fact, if Mario has taught me anything, the water there should turn her into a human, and those make milk, not honey! (Kind of hard to when you’re limited to one stomach.) So after robbing a store for a skirt and top, (Okay then. Perhaps you’d like to explain her change of wardrobe?) She comes to the first place one could conceivably call shelter. If I knew anything about predators, then I’d wager a spider lives here. A spider lives here and…Hey! I know this guy! 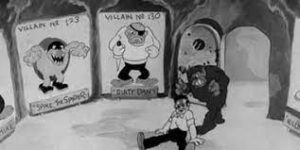 Score that later short another point! (You know, now I’m starting to think that that Terrible Tom character was the cat from “It’s got me again!“)

Spike (who still looks nothing like any spider I’ve ever seen) brings her in. She immediately recognizes the danger she’s in, but tries to escape up his winding stair! You fool! (Oh, and her stripes are back. K.) Her cries and screams reach her husband who seems to be snapping out of his stupor. He’s got no stinger, but he can blow a mean horn to alert the proper authorities. (I like how the cartoon trusts our intelligence enough to not spell out that the bees are riding horseflies.)

Rupert gets there first, and Spike plans to eat him as well. So Rupert just drags a thorny vine through the guy’s crotch! That looks to completely redefine ‘painful’. Imagine how much worse it would be without an exoskeleton. This isn’t going to be a winning fight, so Spike heads for his washtub boat. (Wait, if that’s human sized… I knew it! He’s not a spider! He probably just got spit on by Peter Parker!) The bee’s fight back like planes on a airliner, (One of whom teleports back to her original spot. Coward) but Spike knows how to defend himself, and puts up a good fight.

Time for the best weapon they have! What I presume to be a wasp (and the only insect in this short that has the correct number of limbs) drops a firecracker on the “arachnid”. The explosion not only destroys his tub, but it makes it look a lot like some stocks, and Spike is trapped in them as well. A happy ending for the pollinators. I guess willing to stand up to a predator is enough of a reason for Hunny to forgive her honey. (Come on. You knew I was going to say that.)

Favorite Part: Okay, that way of getting honey was pretty cool and unbelievably creative. I wish I had thought that up.

Personal Rating:2. Doesn’t do anything too creative that you haven’t seen in any other rescue picture. And the soundtrack is rather depressing.