“Our objective will be the hot dog!” 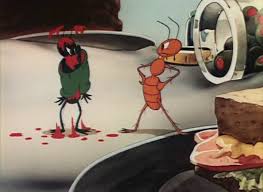 Throughout history there have been many wars. The Civil war, the console war, the game of war, just to name a few. One thing they all have in common is that they were all fought by humankind. But battles aren’t reserved for just people. Sometimes the animal kingdom gets in on the action. Our story begins with a picnic and two colonies of ants. The people who set up the picnic are nowhere to be found, so the ants have free reign over the goodies. It all starts when a red ant and a black ant both lunge for the same olive. There may be plenty of food to go around, but the thought never occurs to them and they declare war on each other. And they ain’t kidding. They’ve got tanks with real caterpillar treads and winged ants to act as bombers. (In case it wasn’t obvious, this short ignores the fact that all of the fighting ants should be female.) A group of reds makes their way to their target. Diving into cheese for cover along the way. When they get what they came for, they are ambushed by the blacks who take it back to their side. (Sadly, the short remembers that it can make a blackface ant joke and does so. Different time periods and all that. At least he only shows up once) The ants are pretty resourceful. Launching a toothpick like a harpoon to catch some peas, (War and peas go so well together you know) and using Limburger cheese as a gas bomb. But in the end, they can’t compete with larger forces, and the battle stalls when a woman comes to take the picnic away. (So I guess she already had eaten before this, but it looked pretty untouched to me. What a waste.) But despite taking it all, she doesn’t take the cake and the ants begin fighting anew. During the scuffle, the generals come to a realization: fighting is what caused them to lose everything in the first place. (Well, most of everything. They did get a few morsels.) A peace conference is declared where they decide to divide the cake equally. Almost. There’s a cherry on top, and each side wants it for themselves. The war reignites.