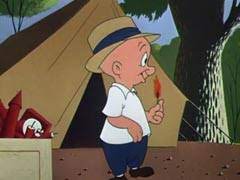 Elmer is all excited for an Independence day picnic. What separates those from their boring everyday counterparts, is the fireworks, naturally. Elmer is just a big kid/arsonist at heart. Even if it’s light out, he gets started lighting the explosives and  flinging them away. One lands near an ant, who despite having antennae, sniffs at the device much like a dog. (Because making animals do things they don’t do is instant comedy.) Poor thing is caught in the blast. (It’s a pretty big ant too! Must be of the “bulldog” variety. Oh! I just got the sniffing!)

I wouldn’t find any fault in Elmer if he just laughed it off with a “whoops” but he actually takes delight in tormenting these innocent animals. (Picnickers are just savage) In fact, he tosses all that he can at the insects, destroying their hills. Not pleased, an ant declares war on Elmer in plain English. (They have chipmunk voices.  I don’t care what anyone says, It’s a gag that never stops being funny.) The war is officiated by presid-ant Harry Truman, and the drafting begins. (Sending the chosen ones to a literal boot camp.)

Elmer is sleeping now. (Probably saving his energy and remaining fireworks for tonight.) This gives the ants the perfect opportunity to sneak over and steal some of his fireworks to use against him. They send him a warning shot to wake him up. Based on the animals that he has faced before, I don’t find it odd, that Elmer doesn’t find it odd, that he is surrounded by literal army ants. He is willing to go to war, and suits up. (With saucepan.) The ants might be strong, but they can’t really heave, so they use mousetraps and “kazookas” to launch their attack. (Not so funny when you’re on the receiving end, huh, Elmer?)

Despite the fact that this is Elmer we’re talking about, he is actually able to put up a decent fight. He sticks his fireworks in the hills, and down the periscopes looking at him. But the ants aren’t only not killed, but they have plenty of numbers. I mean, for every one of Elmer, there’s a million of them. So, he better stock up on troops/supplies. The ants are pretty smart, too. When Elmer tries launching a firework via pipe, the ants rubber band it back into his stomach. Elmer tries to put it out with the water cooler he brought along, (and to think we all laughed at him) but it just causes him to end up inside it. (Which not only makes us all laugh at him, but reminds us of the time this exact thing happened to Sylvester.)

The ants really mean business, and call out the “Royal Flying Ants.” (An obvious nod to the “Royal Air Force” but I like to think that Freleng and his team knew that the royal ants really are the ones who can fly. It’s also another returning gag.) The navy too! Elmer is just a one man army, and knows enough to flee when he is clearly fighting a losing battle. (Nope! I couldn’t type that with a straight face!) Still, he takes what’s left of his supply, and bolts. Unbeknownst to him, many of his fireworks are leaking gunpowder, and the ants light his trail. This leads to a rather spectacular explosion, as the insects celebrate their “Indepen-ants day.”

Favorite Part: I’m sorry, did you miss the fact that Ant Harry Truman is in this picture? He’s one of the most hilariously terrifying, and terrifyingly hilarious creatures I’ve ever seen!