“You guys are nuts.” 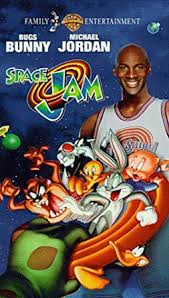 I love this movie, but then again, I am a Looney Tunes fanboy. It’s sad most of the world seems to hate it. I think that is bull crap. This is a masterpiece if ever there was one. At least it did great at the box office.

The history is that people made commercials with Bugs and Michael Jordan advertising basketball shoes. So they figured making a movie was a good idea. (I think it was.) Our plot is that a theme park in outer space, (it is not specified which planet, but I think the whole park is its own planet) sucks. (How can people say that? Didn’t you ever want to ride an Astro-orbiter wannabe that shoots at you? Oh yeah, me neither) The owner decides they need new attractions and figures that the Looney Tunes are just the thing. I’d come.

However, Bugs tricks them into thinking they need to give the toons a chance to defend themselves. Since the aliens are short and have tiny limbs, basketball seems like a shoe in. However the aliens have the ability to steal the ability from five NBA players. Luckily, Jordan was retired at this time. So they don’t nab him. The toons get him for their side and we get the greatest game in all history!

This also introduced us to Lola. She did not have much of a personality in this movie, save for being someone for Bugs to be attracted to. Seems she was popular though, as she appeared in “Baby Looney Tunes”, “Tweety’s High Flying Adventure”, and “The Looney Tunes Show.”

Bottom line if you hate this you have no taste and at the very least you have to watch it once. (There must be more who love this, I know it!) “Tune” in next time where I will name all the Looney Tunes who appear in the film as well as some interesting facts. Woo hoo hoo hoo! Woo hoo!

Personal Rating: 3. (Unless you’re one of those people who can’t stand anything Looney that came out after the Golden age. For you, it’s a 2.)